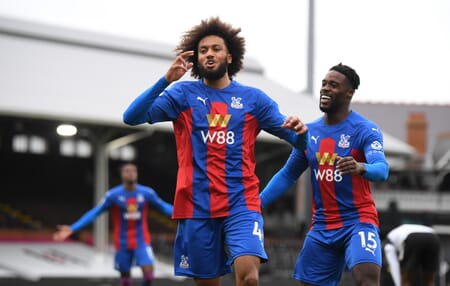 Our betting tip is that the game at the Emirates will end in a draw or an away win. Patrick Vieira returns to a club where he holds legendary status, with the Frenchman having propelled Arsenal to plenty of success.

However, he’s now trying to make a name for himself as manager of Crystal Palace and the early signs are promising. Although the Eagles don’t have many points on the board, they have been the better team against Brighton and Leicester recently. Against the Foxes, Palace rallied from two goals down to land a point and there will be real confidence against an Arsenal side who couldn’t find a way past the Seagulls recently.

Mikel Arteta’s team have lost as many games as they have won this season and we think the Double Chance market is a good way of getting against the hosts.

Arsenal are predictably strong favourites and the bookies have them around the 1/2 mark for a London derby victory, with this implying a probability of greater than 50% that they claim three points.

It means that Palace are the big betting outsiders and the draw is also regarded as a longshot. As far as the Total Goals market, there is not much between the betting odds when it comes to Over 2.5 Goals and Under 2.5 Goals.

However, the bookmakers regard the BTTS No outcome as marginally more likely than the BTTS Yes selection, suggesting that at least one side might struggle to find the net.

Crystal Palace have avoided defeat in five of their seven matches this season. For this reason, our prediction is to take them and the draw on the Double Chance market.

The only losses have been away to Chelsea and Liverpool, teams who are stronger than Arsenal this season. However, it was noticeable at Anfield that the Eagles created plenty of scoring chances and the match was competitive until the final ten minutes. We’re not sold on the Gunners at such a short price considering that they only beat Norwich 1-0 earlier this season and the pressure is certainly on them for this fixture.

Michael Olise is knocking on the door for his first start of the campaign, with Conor Gallagher continuing to shine for a visiting side that previously landed a 2-2 draw at West Ham.