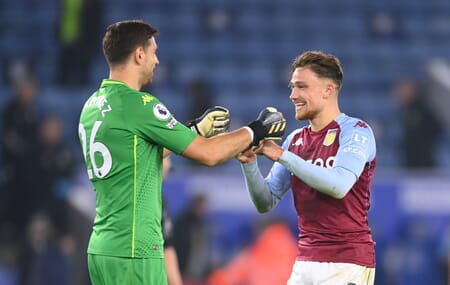 Just as things were starting to look good for Aston Villa, the Midlands side went into a slump. A 1-0 victory at Old Trafford hinted at brighter times ahead, although there have since been three consecutive defeats.

Admittedly, trips to Tottenham and Arsenal were always going to be tough, although a 3-2 reverse at home to Wolves was the real sickener considering that Dean Smith’s side were two goals to the good. Despite that trio of setbacks, Villa have found the net in all of these matches and we’re expecting them to score against a West Ham side who have scored seven goals in four away trips.

The Hammers are enjoying a rich vein of form, winning six of their previous seven clashes and they also found the net when losing unfortunately at home to Brentford.

West Ham are up to fourth place in the Premier League and they are slight favourites to follow up that 1-0 win over Tottenham with another victory in this clash. It’s hardly a surprise that the bookies are respecting a team who have won three out of four away clashes, with Aston Villa marginal outsiders on the Full-Time Result market.

Given the fact that the home side are conceding so many goals, it’s hardly a surprise that Over 2.5 Goals is a shorter price than Under 2.5 Goals for this game. However, BTTS Yes has an even higher probability of happening according to the latest betting odds.

The betting prediction for this match is BTTS Yes and this is a betting pick based on the latest statistics. In six of the previous nine West Ham matches, both sides have found the net, even if David Moyes’ side have scored consecutive 1-0 wins over Everton and Spurs recently.

The main driver for this bet is largely down to how open the past few Aston Villa games have been. The fact remains that the Midlands side have scored in every top-flight clash this season aside from a 3-0 reverse at the hands of Chelsea.

Smith’s side will want to get back on the points trail and attack could be the best form of defence for them. Ollie Watkins and Danny Ings are capable of breaking through a tight West Ham rearguard.