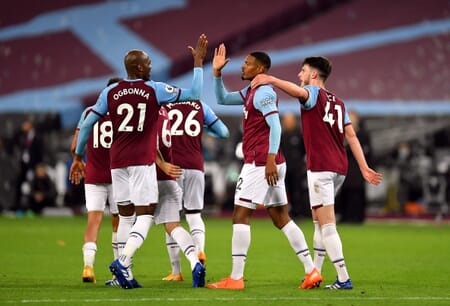 West Ham have enjoyed a strong start to the season, amassing eight points from their first four matches as they look to build on that sixth-placed finish last term. They have ten goals on the board and our betting tip is that both teams will score when Manchester United visit the London Stadium.

It’s hard to see the Red Devils drawing a blank considering that Ole Gunnar Solskjaer’s side have found the net in all four games, including a recent 4-1 victory against Newcastle United where Cristiano Ronaldo enjoyed the perfect homecoming.

There are goals in plenty of departments where the visitors are concerned, with Bruno Fernandes, Mason Greenwood and Jadon Sancho playing supporting roles. While the Hammers are without Michail Antonio, we still think they’ll find the net at least once.

The bookies have predictably made Manchester United favourites to win this game, with the Red Devils trading at odds-on on the Full-Time Result betting market although they have wobbled on the road after a 1-1 draw at Southampton and a fortunate 1-0 win at Wolves.

The layers also anticipate that there will be goals on the cards, with Over 2.5 trading at the shortest odds and you can get a similar price about both teams finding the net during the ninety minutes. It’s no surprise that Cristiano Ronaldo is odds-on to score in his third consecutive match

The prediction is on the Both Teams to Score betting market and we’re going to plump for the “Yes” option. Ultimately, we need both West Ham and Manchester United to find the net at least once. This has happened in three of the Hammers’ first four matches and the same applies to the Red Devils.

Therefore, we’ve got some strong evidence that this bet has the chance to profit, even with Antonio suspended. Cheered on by a home crowd, the Hammers have averaged three goals per match at the London Stadium, with Said Benrahma and Pablo Fornals looking to combine with Jarrod Bowen.

Meanwhile, the presence of Cristiano Ronaldo in the visitors’ side surely points to a stronger likelihood that Solskjaer’s team will find the net during the encounter.