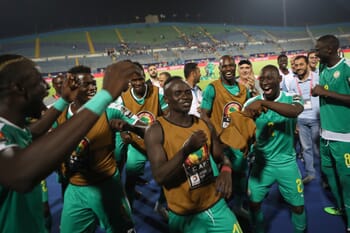 For those who have been following Senegal throughout the Africa Cup of Nations, they will have picked up on a couple of key themes that have accompanied the Lions of Teranga.

The first is that when Sadio Mane steps on to the pitch for his nation, he’s clearly the best player on the pitch, with the Liverpool forward a constant menace for opposing teams and possibly the one who will prove to be the key differential in this clash.

The second is that Senegal are founded on having a strong defence in this tournament. Their rearguard has been rock solid throughout the knockout stake to the extent where Aliou Cisse’s team haven’t conceded a goal against any opponent.

In Cairo at the last sixteen stage, a single goal was enough to see off Uganda, while it was a similar story against Benin at the last eight phase. For those thinking that this represents an easy passage, it’s worth bearing in mind that Benin saw off a dangerous Morocco side.

Senegal then needed extra-time to overcome Tunisia in the semi-finals, with both sides missing penalties in normal time. However, that central defensive pairing of Cheikh Kouyate and Kalidou Koulibaly once again proved to be super strong.

Which brings us on to the 2019 Africa Cup of Nations final. Those expecting a tight encounter might be initially disappointed to find short odds about Under 2.5 Goals, although we think Under 1.5 Goals could be a route forward instead.

Algeria are an attacking team under normal circumstances although they won’t have failed to note that Senegal are so strong defensively and that falling a goal behind could mean curtains as a result.

Therefore, we might expect the Desert Foxes to deploy a game plan which especially looks at nullifying danger man Mane rather than committing too many players forward in attack.

It’s not uncommon to see low-scoring finals in major tournaments where both teams are aware of the prize at stake, with Senegal having never won an AFCON title and that is sure to play on the minds of the players.