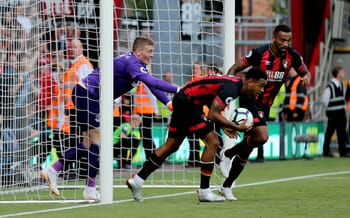 Bournemouth put together an excellent six-match winning run during the month of April to secure a place in the Championship play-offs and they have since downed tools in anticipation of competing for a place in next season’s Premier League.

Norwich City and Watford have already made an immediate return to the top flight and the Cherries will hope to join them, with Jonathan Woodgate now manning the ship and he’ll look for the team to recapture the sort of form that saw them score eighteen goals in those six games.

Can Bournemouth Get First Leg Lead in Championship Play-Offs?

The Dorset team were the second highest scorers at home during the normal Championship season, with the Cherries plundering forty goals and Arnaut Groeneveld and Dominic Solanke were the chief goal-getters with fifteen apiece.

Our prediction is that these strikers will be paired together in a quest to fire Bournemouth into the play-off final, although it could be a tough clash against a Brentford side who came agonisingly close to getting promotion last season.

Brentford have once again finished third in the Championship table although the 2020/21 campaign has been less of a near-miss considering that Thomas Frank’s side weren’t able to keep the pace of Norwich and Watford.

However, the Bees have a master marksman in the name of Ivan Toney who has effectively replaced Ollie Watkins and the former Peterborough man has plundered thirty-one goals in the English second flight and can continue his prolific ways in the play-offs.

Therefore, our betting tip is that three or more goals can be scored in this clash and we can get betting odds at attractive prices with the bookies as both teams look to claim a first leg advantage.