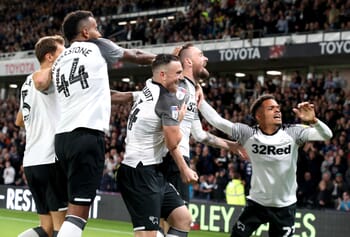 Derby County are seemingly on the rise, with the Rams having spent much of the season dwindling in the lower reaches of the Championship although back-to-back wins over Stoke City and Swansea City have provided new grounds for optimism.

Philip Cocu’s team are up to thirteenth in the table and just seven points outside the play-off places, with Wayne Rooney’s arrival having had a positive impact on the team and they were able to collect just their second away win of the season at the Liberty Stadium.

Derby have now scored thirteen goals in their past four games and there’s every reason to expect them to put on a positive showing at Ashton Gate on Wednesday night, with the team showing character to rally from 2-1 down against the Swans to win in South Wales.

Martyn Waghorn has scored in consecutive matches for the first time this season, while Duane Holmes has finally stepped up to this level and is turning in some bright performances in the middle of the park.

It helps when you have someone like Rooney orchestrating affairs in the middle of the park, with Bristol City now sitting just outside the play-off places and their home form has been the key reason why they’re not higher in the table.

Lee Johnson’s team have only won six games at Ashton Gate and we think they can be opposed for this game by backing the Rams on the Asian Handicap with half-a-goal start. That means a County win or a draw would see us land a profit with this bet.

Derby appear to be hitting form at the right time and a victory in this clash could see them rise several places in the Championship table.

When is Bristol City vs Derby being played?

Bristol City vs Derby will be played at 19:45 GMT on Wednesday 12 February 2020 at Ashton Gate Stadium.

What is the Bristol City vs Derby H2H record?

What is Bristol City’s most recent form?

What is Derby’s most recent form?

What is the predicted Bristol City line-up?

What is the predicted Derby line-up?