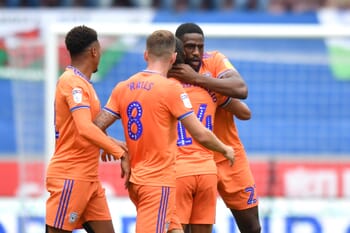 We can’t pass up the opportunity to back Cardiff City on Friday night, with the Bluebirds available at odds-against to beat Sheffield Wednesday and move towards the Championship play-off places.

It’s been a difficult start to the season for Neil Warnock’s side who are yet to win on the road, although their form at the Cardiff City Stadium has been rock solid and the Welsh side have landed five wins and a draw.

The team have also been full of goals in recent matches, drawing 2-2 at Hull before beating QPR comfortably by a 3-0 scoreline. Then came a 4-2 defeat away to high-flying West Brom and Danny Ward will be pressing for inclusion after scoring a brace off the bench.

Cardiff are intent on making their home ground a fortress and they’ll be confident of beating a Sheffield Wednesday who have won three and lost three on the road this term.

The Owls are faring well under Garry Monk although they recently lost 1-0 away to Hull City and were then only able to beat lowly Wigan by a single goal, with the previous 4-1 victory at Middlesbrough representing something of a blip where the Yorkshire side profited from crosses.

Cardiff should make life difficult for their opponents and have a solid central defensive partnership in the form of Aden Flint and Sean Morrison, while Josh Murphy and Nathaniel Mendez-Laing are exciting players at this level and should be able to create chances.

With City having conceded just three goals in five home games, we’ll take them at a nice price to get the weekend off to a winning start and an alternative bet could be backing the Welsh side to win the game without conceding.

When is Cardiff vs Sheffield Wed being played?

Cardiff vs Sheffield Wed will be played at 19:45 GMT on Friday 18 October 2019 at Cardiff City Stadium.

What is the Cardiff vs Sheffield Wed H2H record?

What is Sheffield Wed’s most recent form?

What is the predicted Sheffield Wed line-up?

Who is injured or suspended for Cardiff?

Who is injured or suspended for Sheffield Wed?