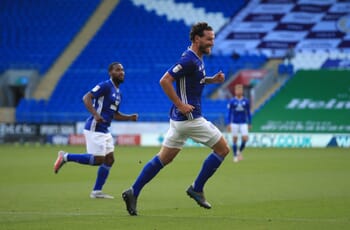 Cardiff City have a chance to return to the Premier League after landing fifth spot in the Championship standings, with the Bluebirds now clashing with Fulham over two legs for a place in the play-off final. It looks like a competitive betting heat and the bookies have the visitors as marginal favourites.

Neil Harris has done an excellent job at the South Wales club, taking over from Neil Warnock and steering City into the upper reaches of the division. Since the restart, there has been a very solid six wins in nine matches, with the team fairly recognisable from the side that came down from the top flight last term.

Cardiff have been full of goals in their last three matches, scoring a sum total of eight times, with Junior Hoilett in good form, although our prediction is that they’ll find it harder to break down a Fulham side who recently beat them 2-0 at Craven Cottage.

It’s no surprise that Scott Parker likes his team to batten down the hatches when they take to the road this season and the Cottagers manager will also want the scoreline to be at least level for the second leg clash in west London.

There has been a stark contrast between the goals scored in Fulham’s home games (66) and their away games (46), with the visitors landing ten draws on the road and they’ve largely been difficult to beat on their travels.

Expect the fiery Aleksandar Mitrovic to put himself about as the lead striker, although the presence of Tom Cairney and Harry Arter in the holding midfield position should add an element of pragmatism to a team who know how to grind out the right kind of result.

The stakes are high and one of these teams are going to be heading to Wembley although our tip means that we might not be any clearer as to finding out their identity after the first ninety minutes of football have been played.

When is Cardiff vs Fulham being played?

What is the Cardiff vs Fulham H2H record?