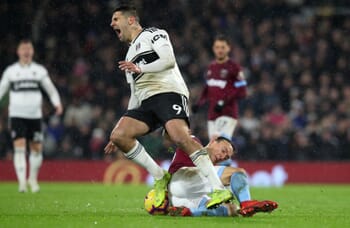 We’re surprised to find Over 2.5 Goals trading at even money for this west London derby considering that both Fulham and Brentford have scored plenty of goals in the Championship this season.

The Cottagers have scored a healthy 52 goals in their 37 matches, while the Bees are the division’s joint-highest scorers with 64 goals, while we should also note that this is a west London derby between two promotion-chasing sides.

We think there’s a bigger than 50% probability that three or more goals will be scored between these sides, with both teams looking for a victory that will potentially get them closer to Leeds and West Brom at the top of the Championship.

Aleksandar Mitrovic is the leading scorer in the division and the Fulham forward is a goal ahead of Brentford forward Ollie Watkins, with the pair having bagged forty-five goals between them this season.

Before the lockdown, Thomas Frank’s side were involved in four consecutive matches where three or more goals were scored, with the most recent clash being a 5-0 spanking of Sheffield Wednesday where the Bees had seven shots on target and a further six off target.

Fulham are in a better position to land automatic promotion and Scott Parker’s team need to make a fast restart to the campaign, with the Cottagers noticeably tougher from a defensive point-of-view before the lockdown.

After losing 3-0 at home to struggling Barnsley, Parker clearly decided to prioritise keeping a clean sheet and just two goals have been conceded in the past four matches, although this becomes something of a must-win match before travelling to Leeds in the next game.

There’s an element of unpredictability about what is going to happen in this first match and we’re happy to take a punt on three goals being scored during the encounter, especially if Watkins and Mitrovic have their shooting boots on.

When is Fulham vs Brentford being played?

What is the Fulham vs Brentford H2H record?