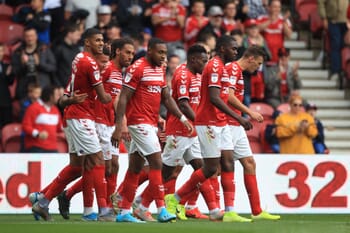 Both of these teams have been Premier League outfits in recent years, although they now find themselves at the wrong end of the Championship and it’s feasible that at least one club will find themselves playing League One football next season.

Middlesbrough have fallen on hard times and the hiring of Jonathan Woodgate as manager was a cheap option which fell in line with the cost-cutting that has taken place at the Riverside Stadium in the past twelve months.

Boro sit twentieth in the Championship table after collecting just 21 points from 22 games although they have recently collected home victories over Barnsley and Charlton to keep their heads above water.

Indeed, the vast majority of Middlesbrough home matches have been low-scoring affairs this term, with a sum total of nineteen goals being scored in eleven games and we’re confident that this one will be similar.

Woodgate will certainly not want to lose to a team below them in the table, with Stoke scrapping away against relegation after a horrendous campaign to date which sees them sitting in 22nd place.

The Potters have lost seven of their ten games on the road this term, although Michael O’Neill has only been in charge for a matter of weeks and there have been wins over Barnsley, Wigan and Luton in this time.

A Friday night win on Teeside would be a massive boost and actually lift Stoke out of the bottom three, with the Staffordshire side playing out a goalless draw against Reading last weekend and looking more assured from a defensive point-of-view.

Considering what’s at stake, we’re actually surprised that the Under 2.5 Goals is trading at such a big price considering that both sides will look to get their noses in front and then sit on an advantage until the final whistle.

While we have a slight preference for Stoke to win the game, we’ll plump for two goals or less to be registered over the ninety minutes.

When is Middlesbrough vs Stoke being played?

Middlesbrough vs Stoke will be played at 19:45 GMT on Friday 20 December 2019 at Riverside Stadium.

What is the Middlesbrough vs Stoke H2H record?