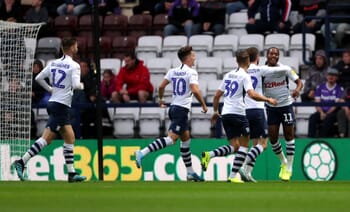 Preston North End’s season was going brilliantly until the last two matches which have seen them lose 1-0 at Derby before getting pummelled 4-0 at Hull.

Alex Neil bemoaned the lack of cover at full-back as part of the reason why the Lilywhites lost at the KCom Stadium by such a convincing margin, with PNE now needing to dust themselves down for the arrival of a high-flying Baggies team at Deepdale.

While that heavy midweek defeat will have hurt Preston, they are still sitting fifth in the Championship table and their home form has been excellent, with seven wins and two draws recorded from nine games played.

Daniel Johnson has bagged eight goals altogether, while the team have been averaging nearly three goals per game at Deepdale and they can pose a serious test for a West Brom side bidding for a fifth consecutive victory.

Slaven Bilic’s side are in the box seat as far as promotion from the Championship is concerned and they served up a sumptuous performance to beat Bristol City 4-1 on Wednesday night, with the Robins unable to contend with a rampant Albion side.

The Croatian has got his team to the top of the Championship table and they have racked up 39 points from 18 games played, with Bilic now wanting to keep the chasing pack at bay and that includes Preston.

The visitors are clearly full of goals at the moment and you have to go back nine games to find the last time that West Brom failed to score, while Preston have found the net in every match at Deepdale this season.

Therefore, the most logical bet is to plump for the “Yes” option on the Both Teams to Score market, with both sides going for a victory and we might end up seeing them cancel each other out.

When is Preston vs West Brom being played?

What is Preston’s most recent form?

What is the predicted Preston line-up?