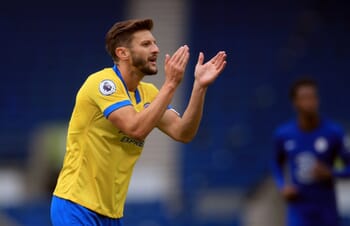 Three days after Brighton & Hove Albion face a new-look Chelsea side at the AMEX Stadium, they return to their home ground to face Portsmouth in an EFL Cup clash where the Seagulls are strong betting favourites to win the game.

If we knew with certainty that Graham Potter would field a full-strength team against Pompey, then betting odds of 1.70 about Brighton winning would make plenty of appeal, although our prediction is that the Premier League side will win irrespective of the personnel on the pitch.

Our Prediction is that Brighton Have Enough Squad Depth to Win

Potter rotated the squad plenty of times during his first season in charge of Albion and might not know his best team at this early juncture of the campaign, with the clash taking place just three days before a long trip to Newcastle where Brighton will be keen to get a positive result.

The most eye-catching signing of the season was Adam Lallana, with Jan Paul van Hecke also potentially getting game time after his arrival from NAC Breda, although the Seagulls squad looks big enough to have a run in this competition.

Portsmouth don’t have far to travel and will earn money from this clash being televised on Sky Sports, with Pompey having landed a 3-3 draw at Stevenage in the first round before winning on spot kicks.

Portsmouth Are Betting Outsiders for a Reason

Plenty is expected of leading striker John Marquis this season and the aim of manager Kenny Jackett is clearly to secure Championship football and it won’t be too disappointing for the League One outfit if they drop out of the EFL Cup so that they can focus on making a strong start to the season.

We think the best betting advice is to keep things simple. Our prediction is that any Brighton XI will ultimately prove too strong over ninety minutes and this is an opportunity for fringe players in the squad to compete hard.