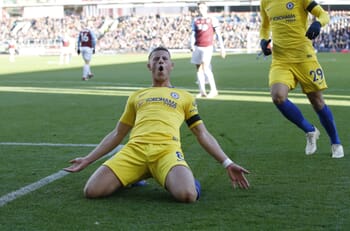 Winning has become a habit for this Chelsea team who have racked up six consecutive victories going into Saturday’s clash against Burnley.

Frank Lampard is starting to pull up trees at Stamford Bridge and owner Roman Abramovich must be delighted that the manager is achieving great results despite not having spent a bean in the transfer market.

Indeed, while many Premier League teams use the EFL Cup to field youngsters, Lampard has been doing exactly that in the Champions League and it’s possible that he’ll give even younger academy players an opportunity to face Manchester United.

Let’s be clear, Lampard did also inherit many experienced players and also decided to allow David Luiz to leave for Arsenal, with Christian Pulisic and Michy Batshuayi almost certain starters in this clash and they will be joined by other top-class players.

Olivier Giroud has barely had a sniff this season but the Frenchman is still a quality forward, while Emerson will be back in the team after falling behind Marcos Alonso in the pecking order at left-back.

Chelsea are playing a vibrant brand of attacking football and we fancy them to get the better of a Manchester United team who are currently without a victory in their past six encounters.

This match is the third of four consecutive away encounters and looks to be the one where several first-team players will be given the night off, with Sergio Romero, Phil Jones, Juan Mata, Anthony Martial and Mason Greenwood among the players likely to make an appearance.

Young defender Brandon Williams made his Premier League debut when coming on against Liverpool although the first team at Old Trafford aren’t convincing at the moment and we think a second string might fall short against their goal-hungry opponents.