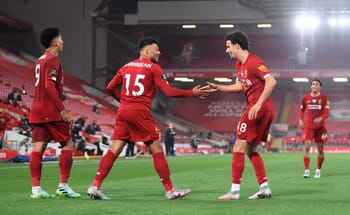 Liverpool have enjoyed a winning start to the season after claiming victories over Leeds and Chelsea, with Jurgen Klopp now plotting the downfall of Arsenal this weekend, although the Merseyside club have a date at Sincil Bank first.

The EFL Cup was a source of inconvenience for the German last season and he actually ended up fielding a youth team in the competition, although it will be a selection of reserve team players that line up against Lincoln City and our prediction is that there could be plenty of goals in the offing.

Can Minamino Shine For Liverpool FC in the EFL Cup?

Takumi Minamino hasn’t quite come to life in a red shirt yet, although he’ll be given game time along with the likes of Curtis Jones, Neco Williams, James Milner and new signing Kostas Tsimikas who will finally get a chance to shine.

Divock Origi also seems to have fun when it comes to EFL Cup games, although we would rather tip a high goal count in the game rather than back Liverpool to win away to a League One side who have made their own strong start to the campaign.

While there’s an obvious gulf in class between the Premier League and League One, Michael Appleton’s side have won league clashes against Oxford and MK Dons, while they demolished Bradford City 5-0 in the previous round of the competition.

This is an opportunity to play in front of the Sky Sports cameras and some might consider betting on the Red Imps on the Asian Handicap market, although betting on a large volume of goals to be scored could be a safer bet.

The advantage of the goals bet is that it doesn’t matter whether it’s the Reds who find the net on a continuous basis, or whether Lincoln chip in with one or two strikes of their own.