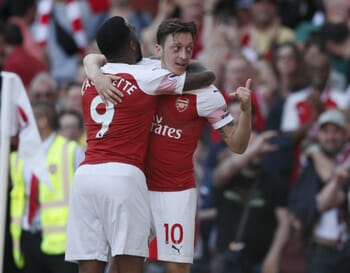 Liverpool effectively fielded a reserve team when they won at MK Dons in the previous round of the EFL Cup and we should expect Jurgen Klopp to do something similar for Wednesday’s clash against Arsenal.

The games are currently coming thick and fast for the Reds and their German manager can’t afford to risk key players considering that they have a points advantage over Manchester City in the Premier League and are also competing hard in the Champions League.

However, there are plenty of quality young players available for selection including Rhian Brewster, Harvey Elliott and Curtis Jones, while we might also expect the likes of Dejan Lovren, Adam Lallana and Jordan Henderson to be involved.

Naturally, Liverpool want to win every piece of silverware this term and they should be considered favourites to claim a victory, although Arsenal also have some talented young players and backing a high goal count could be the best way forward.

The Gunners’ first team came to Anfield earlier this season and lost by a 3-1 scoreline, although it should be noted that Unai Emery fielded a strong team against Nottingham Forest in the previous round of this competition.

Mesut Ozil, Lucas Torreira and Shkodran Mustafi were among the players selected for the clash, with Emery knowing that winning silverware this season could really boost his chances of having a long-term future at the club.

Gabriel Martinelli looks an exciting talent and bagged two goals against the Tricky Trees, while Bukayo Saka is actually getting games for the first team at the age of 18 and the same applies to Joe Willock.

Ultimately, these type of matches often come down to team news and so we should keep a watching brief, although both teams finding the net looks like the obvious play here.