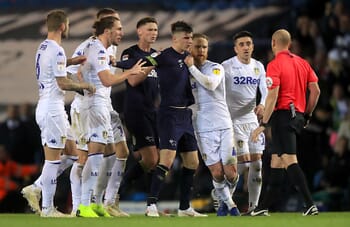 As soon as the EFL Cup first round draw was made, there seemed little doubt that Sky Sports would look to televise this clash between a newly-promoted Salford City and a club who can probably lay claim to being the biggest outside the Premier League.

Moor Lane’s capacity is only a little over 5,000 although it will be a full house for the arrival of Leeds United, with the Championship club having previously been accustomed to visiting Old Trafford when they have to this neck of the woods.

The fact that Salford are part-owned by several former Manchester United players including David Beckham and Gary Neville adds further spice to this contest, although the plain truth is that Leeds are unlikely to be at full strength for this cup encounter.

Marcelo Bielsa made nine changes to his Whites team against Preston last season and promptly saw United lose by a 2-0 scoreline, with the EFL Cup clearly not a priority compared to the Championship where promotion is a massive target following the play-off disappointment against Derby last May.

Not that Leeds won’t be playing for the win and there still might be a gulf in class between a team who are pre-season favourites to win the Championship title and a side who finished third in the National League last season.

For all the hype surrounding the game and the fact that Salford’s ground is among the more modest set-ups in League Two, the Leeds team who set foot on the pitch will be expected to produce a professional job and impress the manager in the process.

However, the visitors are trading at a short enough price so we will instead go for both teams to score in this encounter. Salford will surely get on the front foot in their bid to cause a shock, while Leeds are capable of scoring goals in this clash.

The tie has to be decided on the night and that will also mean that both teams are attacking from the word go.