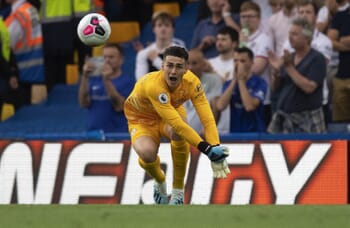 If you’d bet against Liverpool in any Premier League match this season, you would have lost your bet, although that hasn’t been the case in cup competitions where the Reds have suffered a handful of defeats.

Jurgen Klopp’s side were defeated by Napoli in the Champions League earlier this term and recently got beaten by Atletico Madrid in the same competition, while Aston Villa beat a youthful Reds team in the EFL Cup in December.

We might see a similar sort of team line up at Stamford Bridge on Tuesday, with Klopp making it clear that the FA Cup is not a priority for the Merseyside outfit despite the fact that they continue to inch closer to winning this piece of silverware.

The competition is a lowly third on the priority list behind the Premier League and Champions League, with Adrian, Dejan Lovren, Joel Matip, Takumi Minamino and Divock Origi all likely to be involved in this clash.

While these are all quality players, they are currently second string and could be joined by rising star Curtis Jones which certainly reduces the chance of Liverpool winning.

As for Chelsea, we’re not sure that Frank Lampard will field his strongest 11 either, although Olivier Giroud has been short of game time and the Frenchman might jump at the chance to get another start after nudging ahead of Michy Batshuayi in the pecking order.

Kepa can stake his claim for a place between the sticks, with Ruben Loftus-Cheek and Willian also in contention for a starting berth, although Lampard might look to field a strong team as Chelsea realistically can win the FA Cup this season while still qualifying for the Champions League.

We’re going to tentatively back Chelsea at odds-against and feel as though the west London side could be sent off at odds-on come the time of kick-off, with Liverpool unlikely to be shedding many tears if there’s an FA Cup exit.