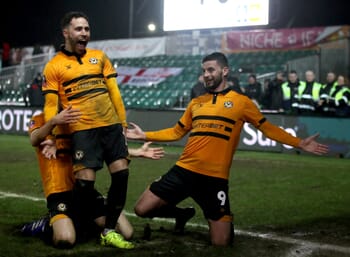 The boot is on the other foot for Newport County on Friday night, with the Welsh club hoping to avoid a giant-killing when they travel to the Wallace Binder Ground in Maldon.

Maldon & Tiptree are one of the surprise names in the FA Cup second round and the Essex team will regard this clash as a magical opportunity to go a round further and potentially land a third round clash against Premier League opposition.

The Isthmian League North Division team have come through several qualifying rounds to reach this stage, having landed a 2-1 victory away to Leyton Orient in the most recent stage of the competition.

The Jammers are clearly one of the better teams in their division and have to be given a puncher’s chance of winning the game considering that they have 25 points from 9 league matches played.

Indeed, it wasn’t until Saturday that Maldon had actually tasted defeat, with the team losing an FA Trophy clash against Enfield Town although the bottom line is that the home side have already scored an incredible 95 goals this season.

Jorome Slew, Charlee Hughes and Danny Parish are all capable of faring at a higher level and County boss Michael Flynn has already admitted that his team will need to play at their best to get a positive result.

Newport are strong favourites to claim a victory and aren’t typically the sort of team who will get rolled over in these sort of encounters, with the Exiles having kept things tight on the road this season.

Just twelve goals have been scored in seven away matches and the visitors won’t be deploying an ambitious game plan for this encounter, which leads us towards the Asian Handicap market in search of value.

The underdogs are available at a decent price with a 1.5 goal advantage and we think they could push Newport close to the extent that the teams end up playing again at Rodney Parade.

Any away win could be enjoyed by a slender margin and we advise a bet on the home side as a result.