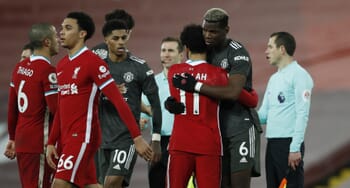 Manchester United meet Liverpool for the second weekend running, with the two teams playing an FA Cup fourth round clash seven days after the sides played out a goalless draw at Anfield which benefitted the Red Devils more.

The bookies are finding this clash hard to call, although it’s our prediction that United will find a way of going through to the fifth round, whether that’s by achieving a normal time victory, extra-time or a penalty shoot-out win.

Ole Gunnar Solskjaer’s team are not in the habit of losing games anymore, with their goalless draw at Anfield illustrating that they have become defensively solid while still offering plenty of attacking threat and United had the game’s best chances.

Our betting tip is that the home side will qualify for the next round of the FA Cup, especially as they seem to have more squad depth than a Liverpool side who are missing their first two central defenders and possibly a third in the form of Joel Matip.

It will be interesting to see what changes Solskjaer makes to the team and there might be a temptation to start with Mason Greenwood and Edinson Cavani, while Nemanja Matic, Alex Telles and Donny van de Beek are also in contention.

Liverpool Short of Squad Options Ahead of FA Cup Clash

Jurgen Klopp might indulge in a spot of squad rotation which could include a start for Divock Origi and Curtis Jones although there aren’t really many additional options despite the fact that James Milner looks set to start for the the visitors.

It’s not Liverpool’s style to sit back although their flimsy away record this season doesn’t inspire confidence and we actually think there could be merit in backing the home win on the Full-Time Result betting market.