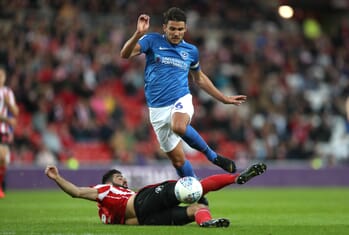 It wasn’t so long ago that Portsmouth used to meet Arsenal regularly in the Premier League, although the Hampshire side now find themselves in the third tier and looking resurgent under Kenny Jackett.

Pompey had a fairly slow start to the season although they are now knocking on the door as far as promotion is concerned, with the team having recently enjoyed a nine-match winning run which has catapulted them up the table.

Jackett’s team have been especially strong on home soil where they have won their past seven matches at Fratton Park and they’ll be determined to give a good account of themselves against opponents who might not be at full strength for this clash.

Arsenal have won their past three matches in all competitions and will benefit from a free game week in the Premier League due to Manchester City’s involvement in the EFL Cup final.

However, Mikel Arteta’s side will have played Olympiakos in the Europa League and the focus is very much on landing a Premier League top four spot, with some of his fringe players being fielded against League One opposition.

While Arsenal are in good form and scoring plenty of goals, we have to pay attention to Portsmouth’s home form where they have won ten and drawn five of their matches in front of their own supporters.

The atmosphere at Fratton Park will be bouncing and striker John Marquis has now scored eight goals in his past twelve matches to justify why the club took the plunge to sign the sharp shooter from Doncaster Rovers.

The bet we particularly like is Portsmouth on the Asian Handicap market. The South Coast side can be taken with a +1.5 goal advantage with a good deal of confidence, with any Arsenal victory potentially likely to be enjoyed by a slender margin.