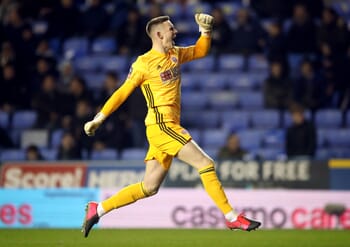 Sheffield United have not restarted the 2019/20 football season particularly brightly, although they weren’t awarded a perfectly good goal at Villa Park in their first game back and had John Egan sent off during a 3-0 defeat at Newcastle. They were also beaten by the same scoreline at Old Trafford a few days ago.

The Blades are still stationed in eighth place in the Premier League table, although it could be that their squad limitations are being exposed considering that they are yet to find the net in 270 minutes of football, although at least goalkeeper Dean Henderson will return between the sticks for this FA Cup clash.

Henderson has probably been United’s best player in what has been a highly successful season, with the future England number one looking to stop an Arsenal team who continue to be distinctively off-colour away from the Emirates Stadium and it’s hard to see why the Gunners are favourites for this clash.

The North London side have only won two of their fifteen away games in the top flight this season and we have little interest in backing a team who will only have three days rest after playing away to Southampton, with this trip to Bramall Lane being their fourth consecutive road trip since the lockdown ended.

Manager Mikel Arteta will have to juggle his squad and the bottom line is that the Thursday game at St Mary’s takes on added importance after the Gunners lost at Manchester City and Brighton to suggest that there are inherent problems within the squad.

Bernd Leno continues to be absent in goal, with Arsenal and Sheffield United looking to get their defensive basics right on the pitch in this game and we might expect a fairly lacklustre affair between two tired teams.