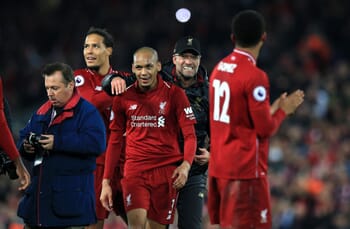 The treble dream is still alive for Liverpool FC, with the Premier League title already in the bag and the Reds looking good in the Champions League, while they are strong favourites to reach the last sixteen of the FA Cup.

After all, Jurgen Klopp’s side head to the New Meadow to face League One opponents who sit sixteenth in the table, although Sam Ricketts’ side will be relishing the prospect of facing such illustrious opponents.

The Shrews haven’t been winning many football matches recently, although they claimed a 1-1 draw at Bristol City in the FA Cup third round before getting the job done in the replay.

Last weekend, there was a creditable 2-2 draw at Fleetwood and we think that there could be some merit in getting with the Shropshire team on the Asian Handicap considering they will be facing a really untested 11.

Klopp will be taking no risks with team selection considering the spate of games that have been taking place, with this clash coming just days after a trip to Molineux and days before a visit to West Ham.

Divock Origi and Adam Lallana will be two of the more recognisable names in the visitors’ team, although Neco Williams, Curtis Jones and Pedro Chirivella are likely to be included, with the manager happy to give youth its fling.

Liverpool’s second string did themselves proud when beating Everton in the previous round although they somewhat rode their luck against the Toffees before finding a breakthrough after Jones’ sublime finish.

Away from Anfield, this could be a tricky assignment and we’re expecting Shrewsbury to give a good account of themselves against players who aren’t accustomed to facing this type of opponent.

Considering it’s a cup competition, a single goal victory will suffice for the visitors and that is part of the reason why we’re betting accordingly.