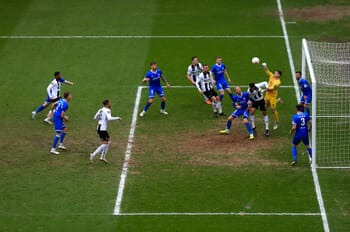 There is one place remaining in the 2020/21 English Football League, with Harrogate Town and Notts County set to battle it out at Wembley Stadium for a League Two spot and we’re set for an intriguing encounter.

Harrogate have never been a Football League club although the Yorkshire outfit have been one of the outstanding teams in the National League this season, sitting second in the table before the season was brought to an untimely halt and they’re now one game away from making history.

Conversely, Notts County are the oldest football club in England and will be desperate to be back in the Football League after suffering relegation last season. They come into this play-off final off the back of six straight victories and our prediction is that the Nottinghamshire side could be the ones celebrating.

It was a rocky first few weeks of the season for Neal Ardley’s side, although they steadily improved as the campaign progressed and they were comfortable 2-0 winners over Barnet in their one-off play-off semi-final after beating champions Barrow before the lockdown.

Kristian Dennis is a canny operator at this level and the same applies to Mitch Rose who is a combustible midfielder with an appetite to win. Our tip is that these two players will have a central role in any victory that County land.

Harrogate are the betting favourites and will fancy their chances in this one-off clash, with Town having beaten Boreham Wood in the semi-finals and they have veteran striker Jon Stead ready to make an impact from the bench.

However, there were signs before the regular season was culled that Harrogate were losing their way a little and we’re happy to recommend the betting tip of Notts County on the Draw No Bet market.