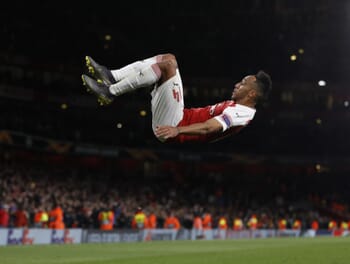 Arsenal climbed into the top half of the Premier League table on Monday night after enjoying a 3-1 victory at the London Stadium.

It wasn’t particularly convincing from the Gunners although they deserve some credit for coming from behind against West Ham and that win will give the team some much-needed confidence ahead of a tough encounter against Manchester City.

Indeed, that was Arsenal’s first win in ten matches, although Pierre-Emerick Aubameyang has been a continually reliable source of goals, with the Gabon forward likely to test a City defence who were torn a new one in the Manchester derby last weekend.

Manchester City currently look as weak as they ever have under Pep Guardiola, with the Spaniard making the surprise claim that his team don’t necessarily have the resources to compete with the leading teams in Europe.

Operating with Fernandinho in central defence appears to have backfired, with the team having only won two of their previous seven clashes and they can wave goodbye to any chance of winning this season’s Premier League title.

Perhaps things are coming to an end for Guardiola at the Etihad Stadium with his City team recently beaten 3-1 at Anfield and they were unable to get the better of Newcastle at St James’ Park.

The goals have dried up for Raheem Sterling, Sergio Aguero continues to be sidelined and it’s simply the case that City are unable to play with the sort of intensity that has helped them win consecutive Premier League titles.

We are therefore going to side with Arsenal on the Asian Handicap market with a solid 1.5 goal advantage. We feel as though the team can build on that win over West Ham and run the champions close.

When is Arsenal vs Manchester City being played?

Arsenal vs Manchester City will be played at 16:30 GMT on Sunday 15 December 2019 at Emirates Stadium.

What is the Arsenal vs Manchester City H2H record?