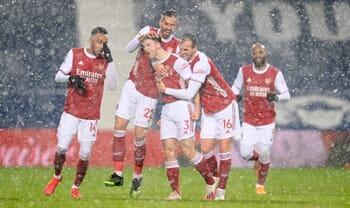 Arsenal have come out of their supposed crisis and could yet have a successful season in the Premier League, with victories over Chelsea, Brighton and West Brom lifting the gloom and the Gunners will now look to mount an assault on the top four places.

Many will regard Mikel Arteta’s side as banker material when they clash with Crystal Palace in this London derby and our prediction is that they will win the game with something to spare considering the turnaround that has just occurred at the Emirates.

Bet on Arsenal to Beat Palace in the Premier League

There are several reasons to think Arsenal can overcome the Eagles, with Bukayo Saka and Kieran Tierney having shone particularly brightly in recent weeks, while Granit Xhaka has been restored to the starting 11 and the defence is also looking watertight.

Alexandre Lacazette also appears to be enjoying a new lease of life even if Pierre-Emerick Aubameyang has been largely subdued this season, with the Gunners bidding to win their fourth consecutive match of a recent strong run.

Our betting tip is to keep things simple and just include Arsenal as a match betting selection although an alternative is to bet them to win to nil or alternatively be leading at half-time and full-time.

Crystal Palace Big Betting Outsiders to Win at the Emirates

Roy Hodgson’s team are just a point behind Arsenal in the Premier League table although they have only won two of their past nine encounters and those victories came against West Brom and Sheffield United who look like relegation fodder.

Eberechi Eze and Wilfried Zaha offer plenty of excitement in attack although the visitors might be penned into their own half for much of this clash and this could be the wrong time for the Eagles to be clashing with an in-form Arsenal who should have too much quality.

When is Arsenal vs Crystal Palace being played?

Arsenal vs Crystal Palace will be played at 20:00 GMT on Thursday 14 January 2021 at Emirates Stadium.

What is the Arsenal vs Crystal Palace H2H record?