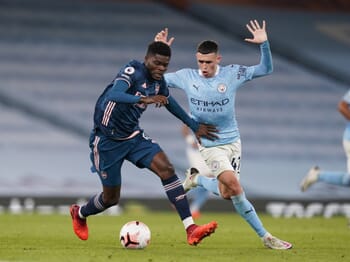 Arsenal are odds-on in the Full-Time Result betting market with bet365 for this Sunday evening fixture against Leicester, although our prediction is that the Gunners are far from certain to win this Premier League game.

Mikel Arteta was delighted with the way his team acquitted themselves at the Etihad Stadium when losing 1-0 to Manchester City last weekend, although the Spaniard will want to see his team return to winning ways and stay on course for a potential top-four spot.

Don’t Bet on Arsenal at Odds-On Against Leicester

We’re not convinced that Arsenal are a good bet at odds-on considering that they have made heavy weather of beating West Ham and Sheffield United at the Emirates Stadium, winning by a single goal margin on both occasions.

Let’s remember that the Gunners don’t particularly get any home advantage in clash such as this one, with Thomas Partey expected to make his full Premier League debut although it might take the former Atletico Madrid a little while to adjust to new surroundings.

Pierre-Emerick Aubameyang has struggled to make a scoring impact in recent weeks and we feel as though Leicester can make a game of things.

Leicester City have suffered with a few recent injuries although Jamie Vardy is expected to return to the team and we should note that Rodgers’ side have won 3-0 at West Brom and 5-2 at Manchester City in their previous two away games.

Wesley Fofana has slotted in seamlessly in central defence and James Maddison might also get an opportunity to start the game, while the pace of Harvey Barnes can be a menace to opposition who haven’t always looked assured in defence.

We are going to tip Leicester on the Asian Handicap betting market where they benefit from half a goal start and that means a draw will be enough to help them win this bet.