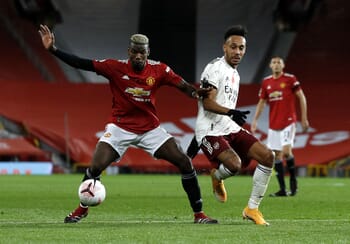 The big Saturday Premier League match takes place at the Emirates Stadium where Arsenal clash with Manchester United and our prediction is that we could see a high-scoring encounter as both teams will be going for a victory in this clash.

The Gunners have had a rollercoaster season which started with a few highs, dipped in the middle and is now starting to get exciting again, with Mikel Arteta’s side hoping to still challenge for a top four spot.

With no spectators attending EPL matches right now, we can largely ignore the fact that Arsenal are the home side and they have only won eight of their nineteen games played this season.

Things were looking a little bleak for Arteta until Boxing Day when the north London side got the better of Chelsea and they have since beaten Brighton, West Brom and Newcastle, with Pierre-Emerick Aubameyang back on the scoring trail and he’s got four goals in his past six games.

However, Arsenal are seven points off the top four places and we think it could be a big ask to see them get the better of a Manchester United team who are unbeaten on the road this term.

Manchester United have amassed an impressive forty points from nineteen games played at the time of writing and the Red Devils are now looking to keep top spot in the Premier League between now and the remainder of the season.

Our tip is not on an away win even though Ole Gunnar Solskjaer’s side are the most likely victors but we’ll instead place a bet on both teams finding the net during the ninety minutes. It looks a relatively safe punt considering it’s happened in eight of United’s nine encounters on the road.

When is Arsenal vs Manchester United being played?

Arsenal vs Manchester United will be played at 17:30 GMT on Saturday 30 January 2021 at Emirates Stadium.

What is the Arsenal vs Manchester United H2H record?