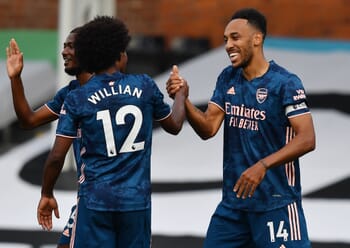 We’re tempted to bet against Arsenal for Sunday’s Premier League clash against Sheffield United, although a Gunners win is clearly the most likely outcome on the Full-Time Result betting market considering that Sheffield United have failed to register a point or a goal to date.

Bet on Arsenal to Blunt the Blades

Blades manager Chris Wilder claimed after losing 1-0 to Leeds that his team should have been the victors in that clash at Bramall Lane, although it’s clear that finding the net continues to be an issue for the Yorkshire side and our prediction is that they might draw blanks at the Emirates Stadium.

Last season, Sheffield United’s successes were largely founded on keeping a clean sheet although they’ve been on the wrong side of 1-0 defeats against Leeds and Aston Villa recently, while they also lost 2-0 at home to Wolves.

Chris Burke has been added to the squad and provides an option up front along with Billy Sharp, David McGoldrick and Oliver McBurnie, although teams have currently found a way to nullify the Blades and we’re expecting Arsenal to shut them out.

Bernd Leno is a solid stopper and is likely to operate behind a back three comprising of David Luiz, Rob Holding and Kieran Tierney, with Granit Xhaka and Dani Ceballos potentially the two in that holding midfield position.

Pierre-Emerick Aubameyang will be keen to return to the scoring trail although Arsenal might need to be patient to break down this type of opposition and you can bet that the visitors will set up in a defensive fashion in a bid to get their first point(s) of the season.

As far as a correct score tip is concerned, we would side with 1-0 or 2-0 to the Gunners although the safest way to play this match is backing Under 2.5 Goals. Don’t expect the Blades to get steamrollered in this one.

When is Arsenal vs Sheffield United being played?

Arsenal vs Sheffield United will be played at 14:00 GMT on Sunday 4 October 2020 at Emirates Stadium.