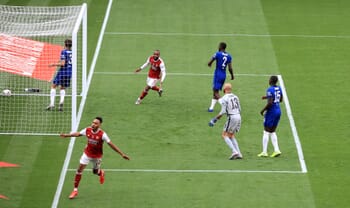 After playing Newcastle United in their opening Premier League match of the 2020/21, West Ham have then been handed a very difficult run of fixtures which could find them at the bottom end of the table in a short space of time.

David Moyes’ men will hope to travel to the Emirates with three points in their back pocket and this is sure to be a difficult assignment for a Hammers side who finished seventeen points behind their opponents in last year’s final standings.

At the time of writing, Tomas Soucek is the only permanent signing at the London Stadium although the was plenty to like about Michail Antonio’s post-lockdown scoring form and the lively Jarrod Bowen looks set to build on a promising first season in the English top flight.

West Ham might be less convincing from a defensive point-of-view and our prediction is that Arsenal will probably score a number of times in this clash, especially if Pierre-Emerick Aubameyang continues his high-scoring ways.

Mikel Arteta started off at Arsenal by being fairly defensive in a bid to stop losing as many games although our prediction is that the Gunners will play a more expansive style of football, especially in games such as this one where they’re the betting favourites to win.

Our main tip is not for Arsenal to win the game although it will be tempting to put them in an accumulator, with the betting odds about the “Yes” option on the Both Teams to Score betting market could be best value of all.

West Ham will feel as though it will pay to get on the front foot rather than try and see out a goalless draw against dangerous opponents, so we’ll go for BTTS and maybe you should also consider Arsenal and both teams to find the net.

When is Arsenal vs West Ham being played?

Arsenal vs West Ham will be played at 20:00 GMT on Saturday 19 September 2020 at Emirates Stadium.

What is the Arsenal vs West Ham H2H record?