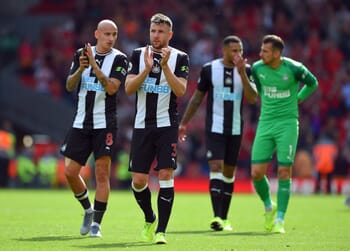 When you’ve hit rock bottom, the only way is up. That was certainly the situation on 29 September when Newcastle were pummelled 5-0 at Leicester although they weren’t helped by the fact that most of the match was played with ten men.

Since that horror show, the situation hasn’t just stabilised but actually become very promising, with the Magpies having taken ten points from their past five matches and they’ll head to Villa Park full of confidence.

We need to talk about Allan Saint-Maximin. Spending £16 million on this lightning-quick winger appears to be a ridiculous bargain considering that the Frenchman has been tearing opposition defences apart throughout the campaign.

Yes, the former Nice forward’s finishing leaves something to be desired although he’s driving the team forward, while the three man central defence comprising Jamaal Lascelles, Ciaran Clark and Federico Fernandez isn’t just shutting out the opposition but also finding the net.

The pressure is all on Aston Villa for this encounter and manager Dean Smith will hope to welcome back Jack Grealish in midfield, with the Midlands side disappointing in their recent clash at Wolves where they were well beaten despite the 2-1 scoreline.

There’s a goalkeeper crisis at the club which means third-choice Orjan Nyland is now between the sticks, with Smith looking for a positive approach in this game and he’ll remind his players that they were close to toppling league leaders Liverpool.

It’s hard to call the outcome of this clash and, while the temptation is to side with Newcastle, it wouldn’t surprise us if the Villans were able to land a much-needed win, especially with John McGinn and Grealish showing intent.

The Magpies found the net three times last time they took to the road and we’ll go for the “Yes” option on the BTTS market which has copped in eight of Villa’s last nine games.

When is Aston Villa vs Newcastle being played?

What is the Aston Villa vs Newcastle H2H record?