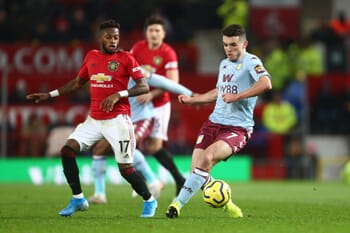 Manchester United are arguably the best side in the Premier League at the moment and we’re expecting them to enjoy another victory when they head to Villa Park on Thursday 9 July.

Naturally, you won’t get rich backing the Red Devils at 1/3 to win in ninety minutes although we can actually get odds-against about Ole Gunnar Solskjaer’s team to triumph off -1.5 goals on the Asian Handicap betting market.

The Norwegian has received plenty of criticism during his temporary and then permanent reign at Old Trafford, although the former Molde and Cardiff manager seems to have a squad who are capable of challenging for the 2020/21 title next season.

Bruno Fernandes is earning rave reviews although the drastic improvement has come about due to Mason Greenwood getting a chance to shine alongside Anthony Martial and Marcus Rashford, with Paul Pogba also now making a key contribution.

While United have only won five of their sixteen matches on the road this season, there was so much to like about the 3-0 triumph at the AMEX Stadium and we could see a similar scoreline against an Aston Villa team who are losing in their battle against the drop right now.

Dean Smith might protest that his side are better defensively after lockdown, although there’s a distinct lack of goals in a team who has been largely reliant on Jack Grealish to make things happen for the Midlands team.

The last Villa victory in the Premier League came on 21 January when beating Watford and it has now come to the stage where the home side will either defend deep and get picked off, or alternatively come forward and get beaten on the counter-attack.

When is Aston Villa vs Manchester United being played?

Aston Villa vs Manchester United will be played at 20:15 GMT on Thursday 9 July 2020 at Villa Park.

What is the Aston Villa vs Manchester United H2H record?