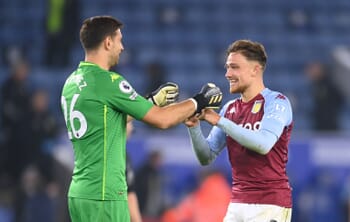 Since losing at Manchester United on New Year’s Day, Aston Villa didn’t have a meaningful match until 20 January when they headed to the Etihad Stadium. It’s been a winter break of sorts for the Midlands club who will hope to be fully up to speed by the time they clash with Newcastle United.

While it’s hard to assess what sort of form the Villans are going to enjoy, our betting tip is for Dean Smith’s side to land a victory against an out-of-sorts Newcastle United side who kept things tight in the first half of Monday’s match at the Emirates Stadium only to lose the game 3-0.

Bet on Aston Villa to Beat Newcastle in the Premier League

Our prediction is that Aston Villa should enjoy a comfortable win over their Tyneside opponents, with Jack Grealish having enjoyed a sparkling season and he will be flanked by Anwar El Ghazi and John McGinn, while Ollie Watkins will be hungry for more goals.

Before slipping down the table due to a lack of games being played, Villa have picked up twenty-six points from fifteen matches and there’s a strong sense that they will have the energy to overcome a Newcastle United team who could get sucked into a relegation scrap.

What Has Gone Wrong for Newcastle United?

Steve Bruce is getting shorter and shorter in the Sack Race betting market, with the Geordie having seen his team lose 50% of their games this season, while recent form has seen the Magpies fail to land a victory in any of their past nine matches in all competitions.

Newcastle seemed to be in decent nick when winning consecutive games against Crystal Palace and West Brom, although it’s been a bleak midwinter and the most worrying aspect is that the north-east side have only scored one goal in their past seven matches.

When is Aston Villa vs Newcastle being played?

What is the Aston Villa vs Newcastle H2H record?