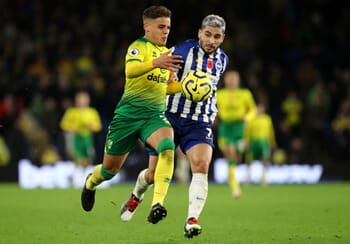 It is clear that Frank Lampard is always racking his brains when it comes to closing the gap between Chelsea and the Big Two, with Liverpool and Manchester City dominating the Premier League division last season and it’s clear that the Blues have an uphill struggle in order to compete for the 2020/21 title.

There has been some noticeable early transfer business conducted after the arrival of Timo Werner and Hakim Ziyech from Leipzig and Ajax respectively, with Chelsea making the most of no longer having the shackles of a transfer embargo which prevented them from signing any players last term.

It’s clear that Lampard favours an attacking philosophy and these players will add to a squad that already possesses the likes of Christian Pulisic, Tammy Abraham and Mason Mount, with the Blues heading to the AMEX Stadium and it’s our prediction that they will create plenty of scoring chances.

As for Brighton, they are the betting outsiders for this Premier League opener although Graham Potter will be looking to build on a solid if not spectacular first season in charge of the Seagulls and there have been notable arrivals in the form of Adam Lallana and Joel Veltman.

One of the biggest issues for Albion last season was scoring enough goals, although a fit Leandro Trossard should make a difference in that respect and we would expect Neal Maupay to build on a promising campaign in front of goal.

While we’re sorely tempted to tip Chelsea to land an opening victory of the season, the bet is going to be both teams to score instead. We just feel as though Chelsea’s mentality is to outscore the opposition and the back four were far from watertight last season.

With Brighton looking to get off to a fast start themselves, they won’t be sitting on their haunches for this one and it could be a lively encounter.

When is Brighton vs Chelsea being played?

Brighton vs Chelsea will be played at 20:15 GMT on Monday 14 September 2020 at American Express Community Stadium.

What is the Brighton vs Chelsea H2H record?