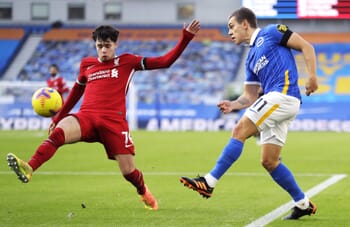 Brighton & Hove Albion have escaped the drop with a few games remaining although this is mainly due to the shortcomings of teams such as Sheffield United, West Brom and Fulham rather than any glory on their part.

After all, the Seagulls have amassed thirty-seven points from thirty-five games and they recently tumbled to a 2-1 defeat at Wolves which saw Graham Potter’s side take the lead only to relinquish this advantage and end the game with nine men on the pitch.

Why are Brighton favourites to win this EPL encounter despite the fact that West Ham have twenty-one more points on the board? The Hammers have been knocking on the door as far as a top four spot is concerned this season even if it appears that David Moyes’ side are going to fall short of this aim.

Potter’s team have certainly been one of the better sides for Expected Goals this season although the bottom line is that they have eight wins from thirty-five matches this season and this lowly rate means we can’t tip the home side with any confidence.

Can West Ham Win at the AMEX and Finish Season Strongly?

West Ham United look like a dangerous side despite the fact that they’ve gone off the boil, with the London team offering plenty in attack and they won’t want to be thwarted as they were at home to Everton last weekend which saw the Toffees come away with a 1-0 victory.

Jesse Lingard continues to enjoy his loan spell from Manchester United and our prediction is that Michail Antonio can get back on the scoresheet, with our prediction being that both teams will find the net during the ninety minutes, especially as Brighton are now safe.