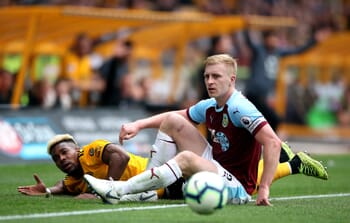 Burnley have three victories in four home matches, while Chelsea boast the same 75% win ratio on the road and we think the draw represents very good value as a result.

The Blues are strong favourites to win at Turf Moor and they’re bidding to land a fourth consecutive away win after blowing Norwich, Wolves and Southampton out of the water when triumphing by an aggregate 12-5 scoreline.

Frank Lampard’s team are a very attacking beast and have Tammy Abraham scoring plenty of goals, while Mason Mount and Callum Hudson-Odoi are providing plenty of attacking menace and it’s hard to see them not scoring at the moment.

However, a trip to Turf Moor always represents a stern test and Burnley’s only home defeat this season was a 3-0 reverse at home to Liverpool which saw the Clarets holding their own until conceding an unfortunate opener which was something of a freak goal.

Sean Dyche’s side have beaten Southampton, Norwich City and Everton at home and won’t be in any mood to allow their opponents to play free-flowing football, with a settled team having Jeff Hendrick and Ashley Westwood providing plenty of steel in the midfield department.

Burnley sit eighth in the table and this will represent a good test of their credentials, although the Lancashire side have the added advantage of not playing a midweek match, with Chelsea clashing with Ajax in Amsterdam.

Whatever the result of that Champions League engagement, it’s a game which will have taken its toll on the players and we should also note that Chelsea have conceded an average of 2.25 goals in each game on the road this season.

Their odds are therefore too short to win this clash and the draw price is really attractive considering that it offers you a chance to quadruple your money.

When is Burnley vs Chelsea being played?

What is the Burnley vs Chelsea H2H record?