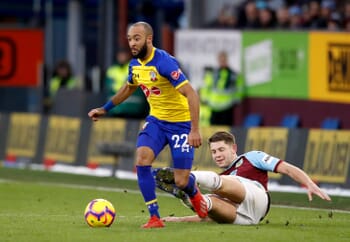 There was very little between these teams when they clashed during the 2018/19 Premier League season, with the sides sharing a goalless draw at St Mary’s in August before playing out a 1-1 draw at Turf Moor in February.

Sean Dyche remained in charge of Burnley for the duration of the season and saw his team experience a difficult start before a revival helped them steer clear of choppy waters, although the Lancashire side are constantly punching above their weight in order to stay in the top flight.

They won’t have a Europa League distraction this time around, although will surely need new faces to avoid a relegation dogfight and look worse equipped for the new campaign than a Southampton team who really looked smart under manager Ralph Hasenhuttl.

The Austrian came in to replace the unpopular Mark Hughes and will now have a pre-season with the Saints before a first full campaign in the Premier League, with Danny Ings having been snapped up permanently from Liverpool and Che Adams has arrived from Birmingham City for a similar fee.

Moussa Djenepo has arrived from Standard Liege for £15 million and the winger could provide plenty of excitement out wide, with the 21-year-old already representing Mali at senior level.

Hasenhuttl looks like the latest Southampton manager to make an impression after the likes of Mauricio Pochettino and Ronald Koeman, with the team set to play an exciting Liverpool-like brand of football and there is already quality within the ranks.

James Ward-Prowse and Nathan Redmond were rejuvenated under the new manager, while there is also more to come from Stewart Armstrong and Callum Slattery, with the manager keen to bring young players through quickly.

The opening match of the season is often unpredictable but we feel that backing Southampton on the Asian Handicap is the way forward, with money back if the game ends all square.

When is Burnley vs Southampton being played?

What is the Burnley vs Southampton H2H record?