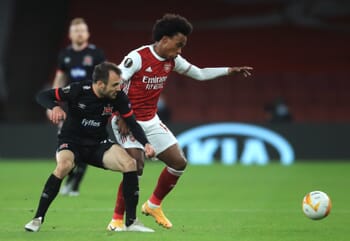 Arsenal appear to be moving in the right direction under Mikel Arteta and their recent 3-1 at the King Power Stadium was achieved without Bukayo Saka and Pierre-Emerick Aubameyang in the starting line-up, while Thomas Partey was also rested.

What will please Mikel Arteta is the way that his team came from a goal down to beat Leicester and it’s not beyond the realms of possibility that the north London side can still scramble into the top four of the Premier League table.

Since beating Leeds 4-2, the Gunners have been looking the part and Arteta will be pleased that attacking players such as Nicolas Pepe and Willian were able to step up after being criticised by sections of the fanbase for inconsistent performances.

On the one hand, Arsenal trading at odds-on might look a touch short considering the visitors have only won six of their thirteen games on the road, although they appear to be growing in confidence and their squad depth is benefitting them at this juncture.

Sean Dyche took his hat off to Tottenham as his team were recently thumped 4-0 at White Hart Lane and perhaps he’ll have similar plaudits for Arsenal after this game, with Burnley battling away valiantly despite not having the luxury of squad rotation.

At the moment, the Clarets are five points clear of the drop zone and Dyche will have found it mildly annoying that Fulham have started picking up points, with Burnley having recently scored three goals at Crystal Palace although they are usually found wanting in front of the net.

Perhaps Chris Wood will come back into the team for this clash although the way forward surely has to be to back Arsenal to continue their strong form by winning this game and that’s our betting tip.

When is Burnley vs Arsenal being played?

What is the Burnley vs Arsenal H2H record?