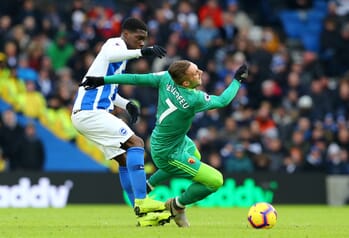 Watford are currently winning the battle to stay in the Premier League and a very late equaliser against Leicester City in their first game after the restart will have fuelled the belief that the Hornets can remain a top flight entity this season.

The Foxes struck what looked to be the winning goal before Craig Dawson’s acrobatic effort and another point from this clash against Burnley would keep Nigel Pearson’s team moving in the right direction.

The latest betting odds reflects that the bookies are finding it hard to separate the two teams. While the Clarets are the home side, they can’t exactly count on a significant advantage and they will be playing this clash three days after travelling to Manchester City.

Meanwhile, Watford will have enjoyed a longer rest after their first game back and our prediction is that they might look a little fresher overall, with Etienne Capoue and Abdoulaye Doucoure looking to dominate in the midfield department.

Burnley got into the relatively recent habit of playing in low-scoring encounters going into the lockdown, with a 1-1 draw against Tottenham following a goalless draw at Newcastle, with Nick Pope proving to be one of the safest pair of hands in the Premier League.

Ben Mee and James Tarkowski have been the long-standing central defensive partnership at Turf Moor, with the pair looking to contain the battering ram that is Troy Deeney, while their Watford opposite numbers are likely to have Chris Wood for company.

Nigel Pearson will just want to see at least a point on the board for these sort of matches and the fact that Norwich City are virtually down and that Aston Villa are struggling for goals and points means that they only need to finish above one of West Ham and Bournemouth.

Our prediction is that Watford will prove defensively mean in this match and we’re backing odds of 1.72 that there are only two goals or less scored in the match. That covers a 1-1 draw along with other low-scoring possibilities.