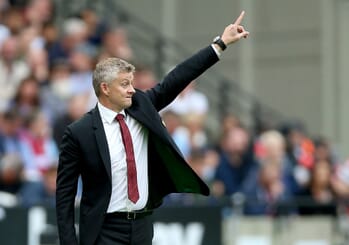 When you’re backing a team at odds-on, you really have to feel confident that they stand a much greater than 50% chance of winning the actual match.

When it comes to Chelsea facing Manchester United on Monday night, all possible options are on the table as far as the Full-Time Result market is concerned. A Blues victory might be the likeliest outcome of all, although we’re still talking about a team who have triumphed just five times in twelve attempts at Stamford Bridge.

Chelsea don’t score many goals at home and have mustered just sixteen thus far, with the most recent wobble coming against an Arsenal side who were reduced to ten men early in the match but still managed to battle on and get a draw come the final whistle.

Frank Lampard appears to have lost confidence in Kepa between the sticks, although the record signing could return for this clash, with Chelsea looking to exact revenge on a team who demolished them 4-0 in the opening match of the season.

That scoreline was not a fair reflection on the actual pattern of play and Manchester United have largely flattered to deceive since that game, with the Red Devils six points behind their opponents and realistically needing to win if they’re to stand a chance of a top four spot this term.

Ole Gunnar Solskjaer has managed to recruit star midfielder Bruno Fernandes along with striker Odion Ighalo who fills the space left by the injured Marcus Rashford and the United team did well to recently win at Manchester City for the second time this season after weathering an attacking storm.

Indeed, it’s been three consecutive clean sheets for the Red Devils since losing at home to Burnley and we can forgive them for some lousy away showings this season on the basis that they regularly raise their game for these sort of contests.

When is Chelsea vs Manchester United being played?

Chelsea vs Manchester United will be played at 20:00 GMT on Monday 17 February 2020 at Stamford Bridge.

What is the Chelsea vs Manchester United H2H record?