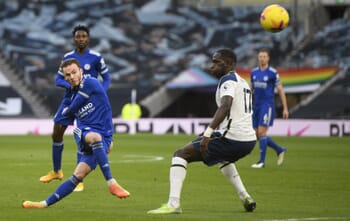 Just a few days after meeting each other in the 2021 FA Cup final, Chelsea and Leicester will meet at Stamford Bridge and the stakes are relatively high considering that both are looking for the positive result that will propel them towards the Champions League spots.

Chelsea’s wobble at home to Arsenal means that they still need points to get over the line, while the Foxes will hope to follow up on last week’s victory at Old Trafford in a quest to secure a top four berth.

Thomas Tuchel’s side fluffed their lines against Arsenal and the German will freshen up the team for this clash, with Chelsea still in a commanding position although our prediction is that they might find it hard to break down the Leicester defence.

After all, Mikel Arteta’s side were able to nullify their opponents for long stretches of last week’s game and Brendan Rodgers will look to deploy a similar game plan, especially as a point would be valuable from this clash.

We might expect Timo Werner to be back in the starting line-up which might stretch the visitors’ back four, with Hakim Ziyech also likely to be in the Starting 11.

The Leicester team are now odds-on in the betting to secure that elusive top four spot in the Premier League and our betting tip is that they’ll play out a low-scoring clash at Stamford Bridge with goals potentially at a premium.

Rodgers might set up to get plenty of men behind the ball and hope that Jamie Vardy and Kelechi Iheanacho are able to use their pace to good effect on the counter-attack, although it might be a safety-first approach at this stage of the campaign.