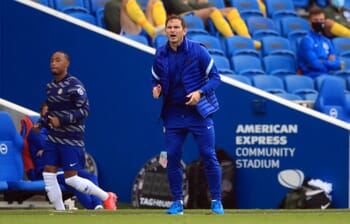 At the time of writing, Chelsea have spent somewhere in the region of £200 million on new players during the current transfer window, with Kai Havertz the latest recruit after completing a £71 million move from Bayer Leverkusen and he will add even more quality to a squad who will hope to challenge for major domestic honours this season.

After heading to Brighton for a Monday night fixture, Frank Lampard’s team play their first match at Stamford Bridge and our betting tip is that they will land at least a point from their clash against the current champions of England.

Chelsea ended the season badly after losing the FA Cup final before a predictable defeat away to Bayern Munich, although post-lockdown domestic form was generally quite strong and included a deserved 2-1 win against Manchester City, with the Blues enjoying a 100% home record at their own ground despite a lack of supporters.

Our prediction is that Liverpool can challenge hard in a bid to retain this season’s title although this is clearly a tricky encounter for the Merseyside team who come into this clash after previously hosting Leeds at Anfield.

Jurgen Klopp’s side are second favourites in the betting to win the 2020-21 Premier League title and the manager has decided against tinkering with the squad too much considering how successful they were last season.

Liverpool won this fixture last season although it took place early in the campaign and Chelsea came storming back after falling behind, while the teams played out a crazy 5-3 match after lockdown although Lampard will be confident that the defence can be a lot tighter now that Thiago Silva has arrived to shore things up at the back.

The Reds failed to win five of their nineteen away games last term and lacked sparkle towards the end of the season, while Chelsea are a team that can pose problems and we’re backing them on the Asian Handicap betting market for this one.

When is Chelsea vs Liverpool being played?

Chelsea vs Liverpool will be played at 16:30 GMT on Sunday 20 September 2020 at Stamford Bridge.

What is the Chelsea vs Liverpool H2H record?