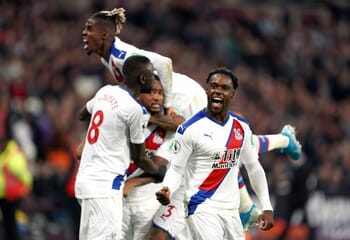 Crystal Palace were absolutely outclassed when they took on Liverpool at Anfield, with the new champions of England running riot against the Eagles.

However, Roy Hodgson’s side had previously enjoyed four consecutive Premier League wins and actually kept a clean sheet in all of those encounters and it’s probably wiser to judge them on those performances when it comes to this Monday night clash.

While Wilfried Zaha is rated doubtful after limping off in his late match, there are some solid operators in the Palace team, with Luka Milivojevic coming back into the Starting 11, while Scott Dann should slot back in alongside Gary Cahill in central defence.

The majority of games at Selhurst Park have been low-scoring on account of this stubborn defence along with the fact that the South London team have been experiencing problems in front of goal for several seasons.

Jordan Ayew is a willing runner and not short of ability although he might run into dead ends against a Burnley side who were able to grind out a 1-0 win over Watford last week and Sean Dyche’s side are once again doing more than enough to stay afloat in the top flight.

Dwight McNeil is proving to be a star in the making, with Josh Brownhill proving to be a valuable acquisition from Bristol City and the defence includes the experienced pair of James Tarkowski and Ben Mee who seem capable of protecting the capable Nick Pope.

Ultimately, we are anticipating a low-scoring match. While the odds about Under 2.5 Goals might seem prohibitive, we can place a maximum bet on this outcome or alternatively put this into an accumulator which can boost the winnings of a multiple bet.

When is Crystal Palace vs Burnley being played?

What is the Crystal Palace vs Burnley H2H record?