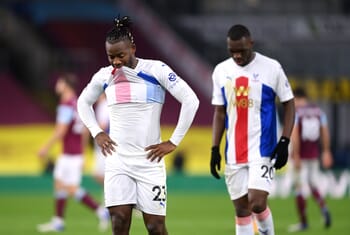 Crystal Palace gifted Burnley the only goal of the game on Monday when losing at Turf Moor, although we’re confident that the Eagles can bounce back and beat a Newcastle team who have been looking off colour for the past few weeks.

Our prediction is that Roy Hodgson’s team will win at Selhurst Park and it should be noted that Palace beat Leeds 4-1 in their previous home match, with Roy Hodgson’s side likely to carve out scoring opportunities against a team who are tumbling down the division.

Why Palace Are a Good Bet to Beat Newcastle

While we’re not sure that Wilfried Zaha will be available for this clash after testing positive for COVID-19, we are still going to tip Crystal Palace to triumph for this game, with the home side having thirteen points on the board from their nine games played.

The Eagles should have landed at least a point at Turf Moor, with Eberechi Eze able to provide trickery in the absence of Zaha and the prospect of both players taking to the field will fill punters with excitement.

The Magpies might have secured an opening victory when triumphing 2-0 at West Ham although it’s been largely downhill for Steve Bruce’s team this season and they could have been beaten by a much heavier scoreline than the 2-0 that was suffered against Chelsea.

Although Newcastle are 1-2-1 away from home this season, the two draws (at Newcastle and Tottenham) were massively fortunate based on the stats and Spurs should really have blown them away on chances created.

Three of the past five matches have seen the Tyneside team beaten and we’re happy to take their opponents at odds-against for this clash.

When is Crystal Palace vs Newcastle being played?

Crystal Palace vs Newcastle will be played at 20:00 GMT on Friday 27 November 2020 at Selhurst Park.

What is the Crystal Palace vs Newcastle H2H record?