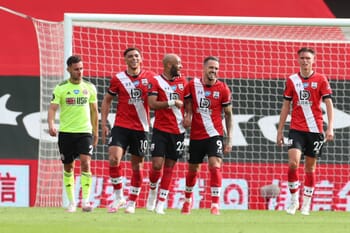 Last season, Crystal Palace came back after lockdown and landed a 2-0 victory at Bournemouth, although that proved to be a false dawn considering that the Eagles then suffered seven consecutive defeats before finishing with a 1-1 draw against Tottenham Hotspur.

Alarm bells were therefore ringing around Selhurst Park and it’s hard to feel confident about Palace’s prospects for the coming 2020-21 campaign considering it’s a quick turnaround from the previous season and the only player that has been signed is Nathan Ferguson.

The promising defender could end up slotting straight into the first team although the south London side managed just three goals in their final eight matches of the campaign and Roy Hodgson will surely be under pressure to produce early results or there is going to be a change of personnel.

Our prediction is that they will fall short against a Southampton team who ended up finishing nine points ahead of their opponents in the final reckoning, finishing up in eleventh spot and there were a creditable nine wins and four draws on the road.

It might be too much to expect Danny Ings to continue racking up the goals that saw him pilfer 22 for the Saints last season although we are tipping Southampton on the Draw No Bet market and it’s worth noting that Che Adams looked bright as a button towards the end of last season.

There were five wins and three draws in nine matches after lockdown and we’re expecting James Ward-Prowse and Nathan Redmond to continue their high performance levels, with the betting suggesting that the visitors are marginally more likely to win the clash than their opponents.

When is Crystal Palace vs Southampton being played?

Crystal Palace vs Southampton will be played at 15:00 GMT on Saturday 12 September 2020 at Selhurst Park.

What is the Crystal Palace vs Southampton H2H record?