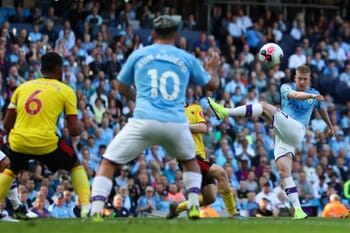 Marco Silva is currently trading as the strong favourite in the Premier League Sack Race betting market and the Portuguese might be running out of time at Goodison Park after their 2-0 home reverse against Sheffield United.

The Toffees have been aiming to break into the top six for the past few seasons although perhaps we should now come to regard them as a mid-table outfit in the top flight, with the supporters surely wary of Manchester City arriving on Saturday teatime.

It wasn’t so long ago that Everton put the Citizens to the sword by a 4-0 scoreline and that was during Pep Guardiola’s first season in charge at the Etihad Stadium, although the Spaniard has since driven his team forward and they’ve won consecutive Premier League titles.

They looked to be firmly in the groove when thrashing Watford 8-0 last weekend and we can probably put that 3-2 defeat at Carrow Road down as an anomaly considering that they spanked West Ham 5-0 on the opening day of the season and also won 3-1 at Bournemouth.

Raheem Sterling was given a rest against the Hornets and we could have the mouth-watering possibility of him playing alongside the mercurial Kevin de Bruyne in this clash, while Sergio Aguero is proving to be suitably deadly and currently tops the scoring charts.

As for Everton, scoring goals is clearly an issue and they just don’t appear to have a reliable marksman who can get into double figures this term, let alone score 20 for the Toffees.

Moise Kean was given the nod against Sheffield United, while Dominic Calvert-Lewin and Cenk Tosun are other uninspiring options, although Alex Iwobi could be thrust back into the starting line-up after a bright cameo against the Blades.

Even so, it’s easy to see Manchester City winning this match by a comfortable margin and we’re happy to get with them to overcome a -1.5 goal handicap and continue to chase Liverpool at the top of the table.

When is Everton vs Manchester City being played?

Everton vs Manchester City will be played at 17:30 GMT on Saturday 28 September 2019 at Goodison Park.

What is the Everton vs Manchester City H2H record?