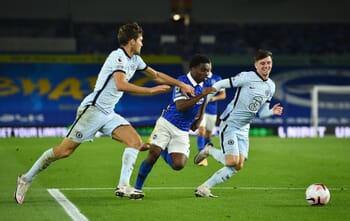 There’s plenty to like about a new-look Everton team who claimed a 1-0 win at White Hart Lane before the Toffees then ran riot against West Brom to enjoy a 5-2 victory and the early signs are that it’s going to be a good season for Carlo Ancelotti’s team.

Ancelotti has managed to persuade James Rodriguez and Allan to sign on the dotted line and the arrival of Abdoulaye Doucoure means that we have a new-look midfield at Goodison Park who have swiftly clicked into gear and the front two are reaping the dividends.

Calvert-Lewin Full of Goals for Everton

Dominic Calvert-Lewin has racked up four goals in his opening two matches and is partnered by the lively Richarlison, although we are betting against Everton for this Premier League clash against a Brighton & Hove Albion side who have enjoyed an enterprising start to the campaign.

The Seagulls produced a strong performance against Chelsea in their opener despite losing 3-1 and then built on this display to beat Newcastle 3-0 at St James’ Park, with Brighton likely to cause some problems for an Everton defence who failed to keep a clean sheet in either of their two openers.

Michael Keane and Yerry Mina are the central defensive first choices at the moment, although the latter stood off Grady Diangana in that West Brom match and our prediction is that the Seagulls can find the net on Merseyside and even get something out of this clash.

Why We’re Betting on Brighton With Our Tip

Our main tip for this Premier League clash is Brighton on the Asian Handicap betting market. We can back them with a one-goal start and that means that we have the insurance of getting our money back if Graham Potter’s side lose by a single goal.

Tariq Lamptey is earning rave reviews in the right-back position, Adam Lallana lends quality and experience in midfield and we like the sharpness of Neal Maupay, with the former Brentford man bagging a brace at St James’ Park.

When is Everton vs Brighton being played?

Everton vs Brighton will be played at 15:00 GMT on Saturday 3 October 2020 at Goodison Park.

What is the Everton vs Brighton H2H record?