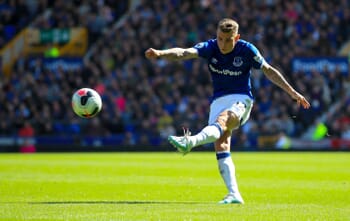 Just as things were starting to look rosy for Carlo Ancelotti’s team, they were brought back down to earth with a bump at Stamford Bridge, with Chelsea putting four goals past Everton and it could really have been more.

Several months have now elapsed since that game due to the COVID-19 lockdown and the Toffees have had the opportunity to regroup, return to training and focus on completing the season, with the first encounter pitching them against their Merseyside rivals. It's hard to be exact with our betting tips considering that neither team have had a competitive match in such a long time.

Our prediction is to expect a solid display from the home team when it comes to the Merseyside derby, with Everton having the opportunity to hand Liverpool a second successive defeat on the road after the Reds produced a tame performance at Watford, something that was our tip when the champions-elect went to Vicarage Road.

Before the country went into lockdown, Liverpool got knocked out of the Champions League by Atletico Madrid and Jurgen Klopp’s side had been limping towards a first title in thirty years. Perhaps the players were just exhausted from the exertions of getting themselves into such a strong position.

You could argue that Liverpool look good in the betting considering that they have won twelve of their fourteen away matches in the Premier League this season, although that defeat at Vicarage Road was followed by a reverse at Chelsea in the FA Cup to indicate that they are vulnerable.

Even a 2-1 victory over Bournemouth wasn’t the champions-elect anywhere near the best they have played this season and we can expect lots of robust challenges, with the Goodison Park faithful hoping to see their team wreak revenge for that 5-2 defeat at Anfield even if the fans can only watch on their TV set.

Everton have only lost three games on home soil this season and came close to beating an in-form Manchester United before the lockdown, while they haven’t tasted defeat at Goodison since the end of November when the writing was very firmly on the wall for Marco Silva.

Our prediction is to get with the Toffees with a one-goal advantage on the Asian Handicap market. That way, you actually have the insurance of getting your money back should they lose by a single goal. However, we think they can do even better than that.

When is Everton vs Liverpool being played?

What is the Everton vs Liverpool H2H record?