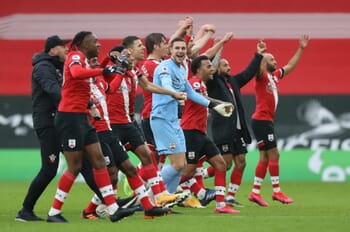 Everton looked impressive when winning the Merseyside derby last weekend, with Richarlison scoring early in the game before a penalty sealed the points and a first Toffees win at Anfield in over twenty years.

However, it has to be admitted that Goodison Park has hardly been a fortress for Carlo Ancelotti’s team this season and our tip is that they’ll struggle to beat a Southampton team who previously beat the same opponents at St Mary’s this season.

Everton have won four of their twelve home matches this season, with the last of these victories coming in December thanks to a 2-1 triumph over Arsenal when fans were in the stadium.

Since then, they have regularly hit the buffers, with Newcastle and Fulham among the teams who have left Goodison Park with three points and this is definitely a team who seem better suited to soaking up pressure and hitting teams on the break, with away stats of 8-2-2 bearing this out.

While Dominic Calvert is back in the squad after injury, one can’t ignore the difference between the home and away form, with our prediction being that Southampton can get at least a point here.

Back Southampton on the Asian Handicap Betting Market

The Saints have had a few wobbles in recent weeks and their 9-0 pummelling at the hands of Manchester United was a real setback although there were mitigating circumstances for that defeat and a 1-1 draw with Chelsea gave a better illustration of where the team are at.

Ralph Hasenhuttl’s side have avoided defeat in seven of their eleven away games this season and they have Jannik Vestergaard back in defence, with Takumi Minamino impressing on loan from Liverpool and he could be a thorn in the side of the Reds’ Merseyside rivals.

When is Everton vs Southampton being played?

Everton vs Southampton will be played at 20:00 GMT on Monday 1 March 2021 at Goodison Park.

What is the Everton vs Southampton H2H record?