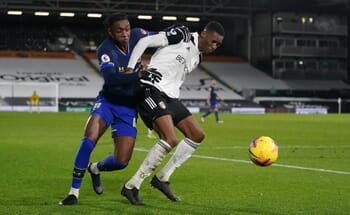 Fulham have made the Premier League relegation scrap a good deal more interesting after losing just one of their past eight top-flight encounters and the Cottagers certainly look capable of staying in the top flight this season.

The problem is that they’re not scoring enough goals although they would be happy with a low-scoring draw against Tottenham this week and our tip is Under 2.5 Goals which is available at a reasonable price with the leading football betting sites.

Can Fulham Produce a Shock Against Spurs?

We’re half-tempted to have a little wager on Scott Parker winning against one of his former clubs, with the young manager having turned out for Tottenham during his playing days and his side look a touch overpriced at 3/1 to get the better of erratic opponents.

What is really impressive about Fulham is their ability to keep things tight and we’ve seen them keep four clean sheets in their previous five matches, with Joachim Andersen and Tosin Adarabioyo providing plenty of stealth in those defensive positions.

They will look to keep close tabs on Harry Kane and the other visiting attacking players and we expect the game to be tight as a result.

Jose Mourinho needed an emphatic victory on Sunday against Burnley and he certainly got one, with his team landing a 4-0 victory which just about keeps them in the top four hunt this season and it appears that Gareth Bale has reached the desired level at long last.

The Welshman is one of the most outstanding performers in Premier League history and bagged a brace against the Clarets, although his team could find it tougher going against a disciplined Fulham side and we think a low-scoring encounter is the one to back this time around.

When is Fulham vs Tottenham being played?

Fulham vs Tottenham will be played at 18:00 GMT on Thursday 4 March 2021 at Craven Cottage.

What is the Fulham vs Tottenham H2H record?