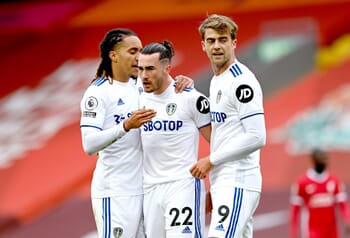 Leeds United pulled off one of the shocks of the 2020/21 Premier League season when defeating Manchester City at the Etihad Stadium and Marcelo Bielsa’s side are now looking to lower the colours of a Liverpool side who have not been convincing this year.

Jurgen Klopp’s side will travel to Elland Road shortly after a Champions League engagement against Real Madrid and our prediction is that they’ll struggle to live with the intensity of a Leeds team who ran the same opponents close at Anfield earlier this term.

Can Leeds Pull Off a Premier League Shock v Liverpool?

Some might not regard a Leeds victory as a particularly big shock considering their fantastic achievement of beating Man City with ten men, although the Yorkshire side are big betting outsiders and they look worth supporting with some kind of advantage in this clash.

Patrick Bamford should be nice and fresh after being withdrawn early in the clash at the Etihad, while Raphinha continues to sparkle in a white shirt and Stuart Dallas is now thriving in a midfield role, with the Northern Irishman scoring a brace against City.

It would be a strong achievement if Liverpool could manoeuvre their way back into the top four of the Premier League table considering that they experienced a massive fall from grace which saw them lose six consecutive games at Anfield against all the odds.

It’s easy to see why the bookies are making the Reds favourites for this clash although the betting tip has to be Leeds with a +1 goal advantage, especially when you consider it will be stake returned should the visitors win by a single goal.